The yellow channel we discussed at 1pm is doing a good job of guiding the market.   Still in the megaphone, still trending upward. 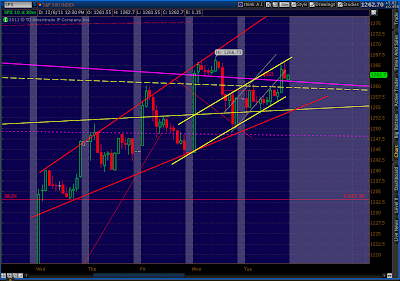 This churn is getting old… now we’re back testing RSI resistance, meaning the very near-term should be up. 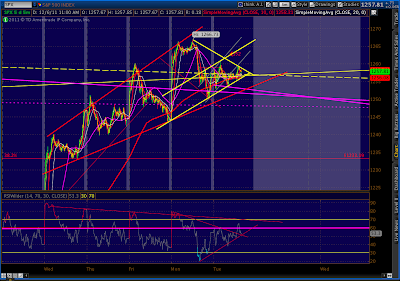 Should have slept in this morning…  So far, all we’ve really accomplished is the pattern we’ve seen way too much of lately — a symmetrical triangle.  But, it’ll eventually break.  The counter-trend rally has the upper hand until the megaphone pattern is violated to the downside. 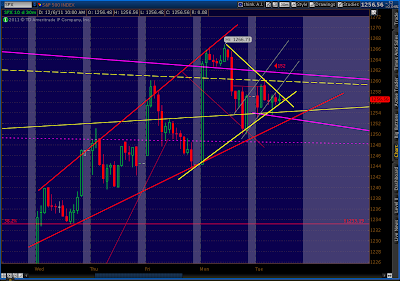 Note that as long as the megaphone remains in play, the market can continue waffling on a general upward path indefinitely.  The lower line of the triangle (yellow) can be paired with a parallel line to construct another upward-sloping channel.

SPX is still waffling.  A move below 1253 will invalidate the IHS we were watching.  But, so will uninterrupted sideways movement — since a H&S pattern should be roughly symmetrical.  We broke out above the neckline, but the trend has been down ever since.

We appear to be backtesting the lower bounds of the green channel.  But, this move also needs to be confirmed.  Otherwise, we can’t know for sure if we’re simply seeing a broadening of the channel.
The real test will be the red TL off the 1266 high.

From an RSI standpoint, we’re backtesting both TLs of resistance. 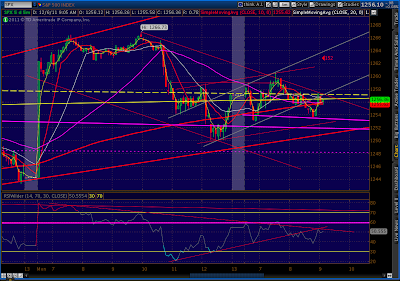 A break beneath the megaphone pattern at around 1250 would serve as confirmation of a downward move and would be a good intra-day entry point.  After breaking, most patterns back test — another logical entry point to play the downside.

SPX showing indecision.  Follow the green upward-sloping channel or the red downward-sloping one? Note the RSI TL’s also reflect a fork in the road. 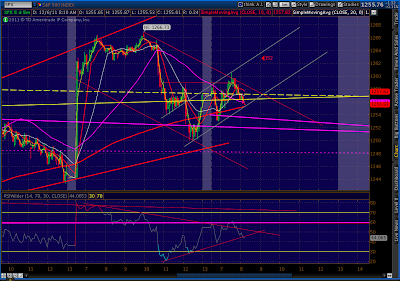 There’s a tiny little inverse head and shoulders pattern potentially setting up on the 5-min chart.  If we hit 1259, watch out for a run up to 1268 or so. 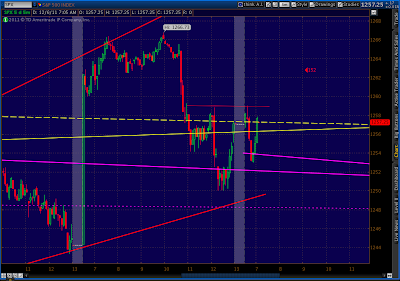 SPX has traced out a bear flag and an ascending broadening wedge, commonly referred to as a megaphone.  According to Bulkowski, these puppies break out to the downside 73% of the time.  Although the market seems to be pausing, awaiting for the umpteenth time the follow-through on a miraculous euro stick-save, a downward move is my preferred technical picture. 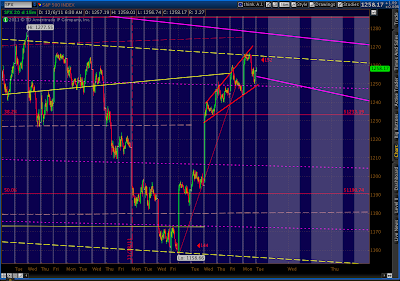 We tested the 200 SMA yesterday, but closed beneath it.  There is obviously still some upside momentum waiting in the wings in the event the euro-cure actually produces something meaningful this time.

Should that occur, prices should be limited to 1307-1313 (the oval), reaching a TL connecting the May 1370 high and the July highs.  (In this market, that could occur in as little as a day.)   It should soon be obvious which of the yellow channels — the upward sloping solid channel or the downward sloping dashed channel — we’re going to follow. 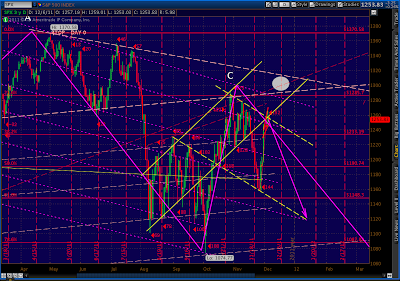 But, for now, the TL off the 1292 high is doing quite nicely in containing any further upside.   If you’re wondering what the purple lines are, I’m working on updating the longer term picture from a harmonic and chart pattern standpoint.  I’ll post it a little later this morning.