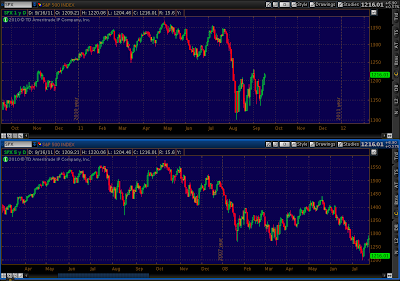 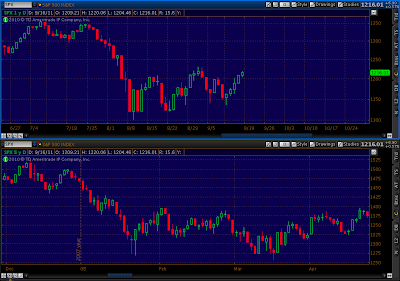 As of this past Friday, we have climbed 120 points off the bottom (27 days) and are 10 points away from establishing a new higher high.   If this doesn’t mean anything to you, go back up and read the last paragraph again.

And my last chart for the weekend — the comparison between the past 5 weeks and the overall 2011 topping pattern.   Eerily similar. 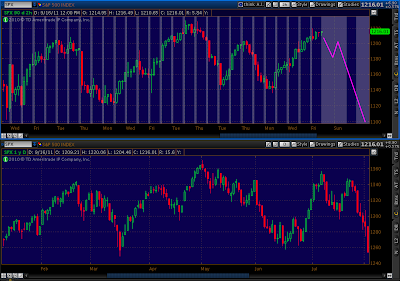 Some believe that Greece and EUR problems are baked into current prices, that we’ve seen the bottom.  I say the problems are just beginning to get much worse.   I think the only thing baked into prices is the belief that the Fed can wave its magic wand and bring back the bull.   I believe there will be a lot of disappointment in the weeks ahead.

I think the huge rally engineered over the past 5 weeks was a do or die effort by market makers to salvage their books after massive losses sustained in the 250-point plunge.  They got through OPEX alive, and will position themselves better in the coming leg down.

Sorry,  couldn’t resist this one.  Maybe it’s nothing, but the bearish Bat pattern we completed Friday reminded me of similar patterns I’d seen on dates I consider equivalent.  The pattern shapes vary, but they all end with a .886 Fib retracement.  You decide.

Long, long week for us bears.  But, the day went well.  And, next week should be a lot more fun. 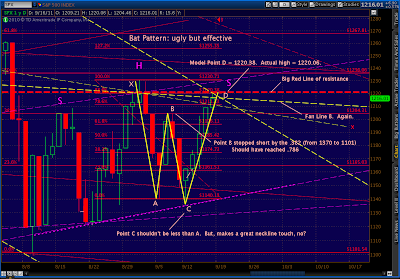 As someone recently told me, you can’t make this stuff up (no matter how often I try.)   For instance, check out the 2 standard deviation regression channel from the Aug 9 low. 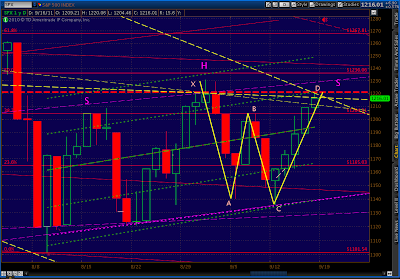 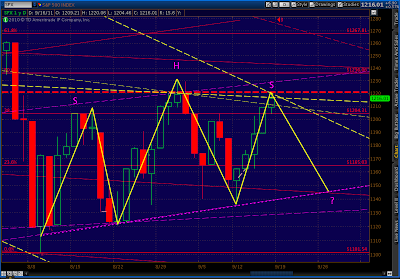 Here’s a view of the big picture.  I like this chart, also, because it does a good job of showing the Big Red Line that’s being backtested right now (along with Trend Line X.) 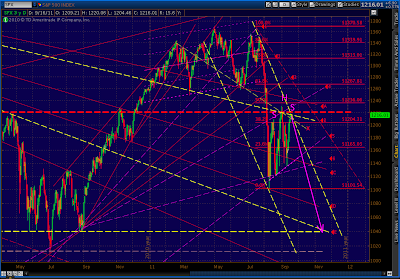 It made a couple of pretty important stops in Apr and Nov 2010.  Fan Line E (from Oct 2007 through the Apr 2010 high) might play an important role in the near future.  I’m drawn to the intersection of E and a horizontal TL marking May, Jun and Aug 2010 lows — wondering if this might be the terminus of the wave 5 unfolding (pure speculation.)
But, notice what happens if we connect with the neckline (Fan Line 5) at 1145.  The H&S completed over the past month becomes the right shoulder in a larger H&S pattern that has potential to 860. 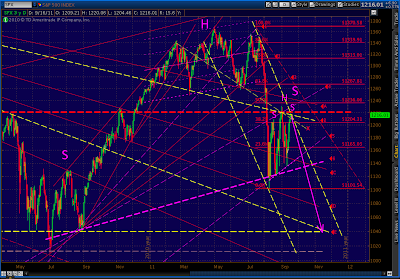 But, why stop there?  If we first get a nice bounce at 1040, say a Intermediate Wave 2 of 100 points or more that backtests Fan Line 5, the trip down to 860 would complete an even bigger H&S pattern (neckline = Trend Line at E) that targets 710. 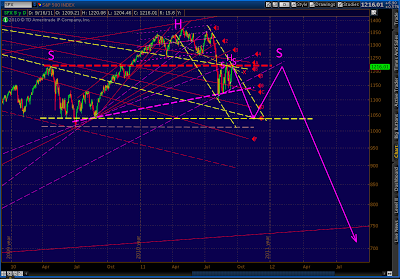 That’s a lot of “what if’s” and “once upon a time’s.”  Could it happen?  It certainly fits with my view of the world economy over the next few years.  Will it happen?  Stay tuned.
ADDENDUM…
Thanks to “Just Me” for bringing a very cool chart to my attention.  In the past 20 years, there hasn’t been a serious incursion through the SMA 500 that didn’t “take.”  In other words, no false signals. 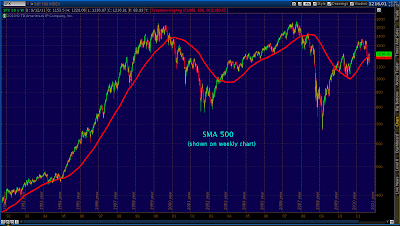 Someone would have done pretty darned well just buying and selling on the crossovers.   The current crossover doesn’t hold much hope of a return to 1370 anytime soon.