Every once in a while, I make myself sit down and reassess everything I believe about the markets.  As most readers know, I’ve been bearish ever since my first post on May 2, 2011.  The excessive bullishness I saw in the markets had finally gotten to me and, as fate would have it, I sat down to write about it. 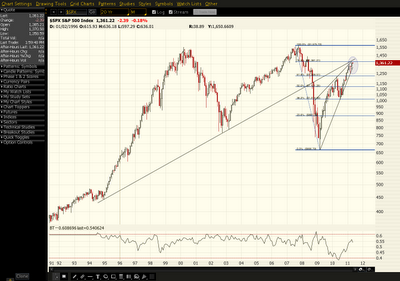 Back then, I saw we were approaching a trend line coming up from the late 1980’s and drawn through the 2002 lows.  We were also approaching the .786 Fib retracement of the Oct 2007 – Mar 2009 Gartley.  We were very deep into a rising wedge, and we were also about to complete a large Crab pattern that dated back to Apr 10.

Sure enough, that was a potent combination.  The market topped that day, and didn’t finish dropping until almost 300 points later in what was widely considered (by bears at least) to be the first wave of P3.  Now, 330 points and many redrawn wave counts later, it’s a great time to reassess the big picture.

First, it’s worth noting that we’re back to within 45 points of that long-term trend line — currently at 1451 and rising about 8 points per month.  We’re also bumping up against a new rising triangle.  And, the .886 Fib retracement of the Gartley is up ahead at 1472 — around the end of May on the TL. 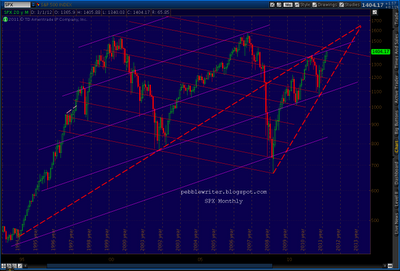 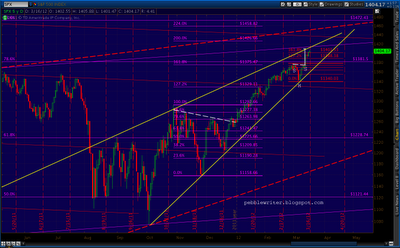 Also entering the picture above is one of the purple channel line drawn from the 1576 Oct 07 high.  It’s placement is somewhat inexact, but note that it is precisely parallel to the trend line connecting the 2002 and 2009 lows, and all the other parallels which have been influential over the past 10 years.  Today, it crosses in the vicinity of 1439.

While a move down from here would make perfect sense, it seems odd that we’d leave the .886 Fib line untouched at 1472, particularly given its proximity to the trend line from the 1980’s and the rising wedge apex — all towards the end of May.  There’s also a 1.272 completion at 1451 of the large Butterfly pattern ranging from 1370 to 1074. 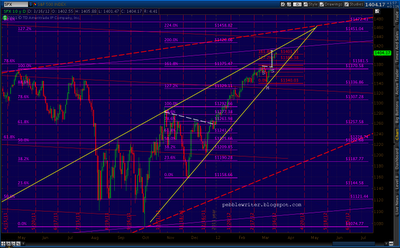 All this leads me to believe we’re likely to see a reaction in the next few days, a decent-sized drop down to 1380 or so, followed by one last ramp up to the 1450-1470 area.  If I’m wrong, and we see a larger drop here, things could get ugly in a hurry.