Feeling bullish?  Excited about auto sales after headlines like these?

Take a closer look.  From GM’s own investor relations website: 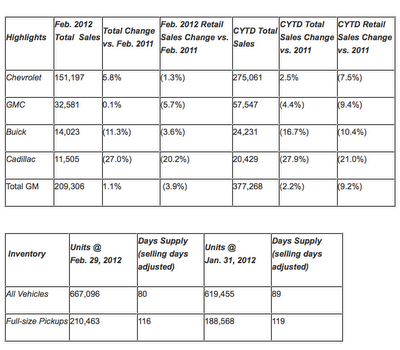 Notice the 3.9% year-over-year decline from Feb 2011?  How about the 2.2% decline versus ytd 2011?  They’re made all the more negative when you consider the channel stuffing going on.  Channel stuffing, for those who aren’t familiar with the term, is forcing sales through dealer channels even though there’s no demand for them.  It’s deceptive.  Period.

And, lest you think this is an aberration, check out this very telling Zerohedge chart reflecting GM’s growing inventory: 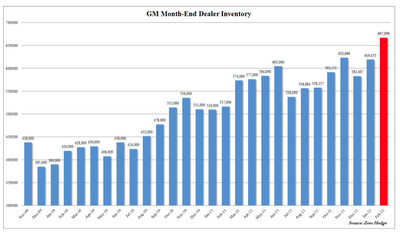 As they say, a picture is worth a thousand words.  Although, if GM were in charge, it would be worth two thousand (but dealers all over the country would be holding clearance sales on them, come December.)

I get tired of saying it, and you’re probably tired of hearing it, but financial reporting has become largely a confidence game.  Companies like GM have no compunctions about blurring, shading, or even outright lying about their results.  And, the mainstream media has absolutely no problem reporting this crap as gospel.

Why?  Because good news is good for markets.  And, strong markets are good for bank, brokerage and investment banking profits.  You know, the same guys who buy all those ads in the WSJ and on CNBS.  Even (some would say “especially”) our government encourages this outrageous conduct. Rising markets virtually guarantee reelection; it ain’t folks who emptied their 401(k)’s to pay the rent that contribute to campaigns.

The SEC used to care, and would occasionally prosecute someone for lying to investors.  Now, it’s up to the blogosphere, fringe guys like me who are drowned out by the incessant bullish drumbeat of the Murdocks and Buffets of the world.

Like all good soothsayers, I take this responsibility seriously.  But, there’s just too much for one person to keep up with.  So, check Zerohedge, ShadowStats and Mish daily.  And, ignore us tin foil hat wearers at your own peril.  As Julius himself would tell you, better safe than sorry. 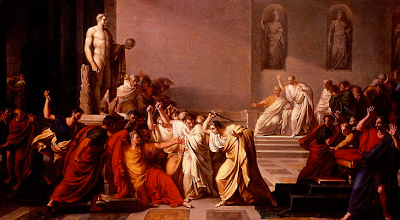