↓
Home Menu ↓
Skip to primary content
Skip to secondary content
Home→Charts I'm Watching→A Tipping Point: March 23, 2012
Bears are understandably shell-shocked after the past three months.   Top picking has been a frustrating and humbling experience, as markets — like an addict in search of his next fix — have ignored everything but the promise of additional QE.  But, the improbable low-volume, non-stop melt up might finally be at a tipping point.

As noted in yesterday’s post, several key indices have finally reacted off their harmonic pattern targets.

Each of the indices is showing bearish divergence on the daily time frame within an overextended rising wedge that’s in danger of being broken — but haven’t broken yet.  In spite of the completed patterns, there are some potential bullish patterns, such as the Dow’s Bat and SPX’s Butterfly, that should take prices just a little higher.

I’ve spent the past several days wandering the charting desert in search of some sign of things to come.  I posted a bit the other day about the SPX wedge within a wedge and how we’re at Fibonacci levels of time and price in each.   I started by charting some basic channels and fib levels, along with the rising wedges. 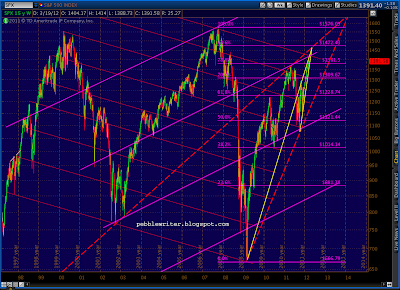 As we discussed the other day [see: Big Picture, Part 2], the smaller yellow wedge apex is not only right at the .886 of the 2007-2009 price decline, but also the .886 fib levels of the larger rising wedge apex.  On top of all that, it’s also at the .618 of the large rising wedge in terms of time.  This is significant, because rising wedges commonly give up the ghost around 61.8% of the way to their apex. 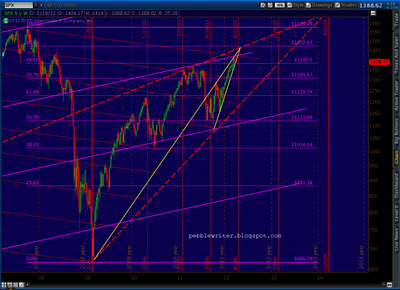 And, within the smaller rising wedge, we can also see we’re at important fib levels — .786 in terms of price and .886 in terms of time. 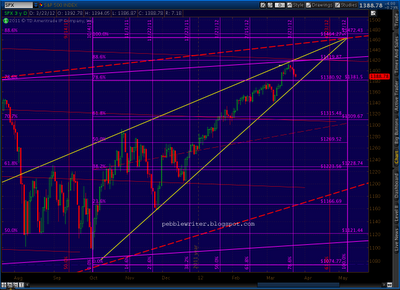 But, I know I don’t have to remind anyone here that rising wedges can hang on for a long time — especially lately.   And, as mentioned earlier, there are still some potential bullish Butterfly Patterns that could fulfill to the upside — notably SPX 1419 and 1433.  And, sometimes harmonic reactions are pathetically small bumps on the road to bigger and better things.

Thus, the days spent wandering the desert.  And, let me be clear, this is pure spit-balling folks.  I’ve been looking at long-term patterns in the markets, trying to discern similarities that might offer a clue as to the big picture.  One era that fascinates me is the 1970s.

We had a decade-long war in Vietnam and an oil shock when OPEC imposed an embargo in response to our military support of Israel in the Yom Kippur War.  Oil prices went from $3/bbl in 1970 to nearly $40 in 1980.  The following chart, from the EIA and posted on Wikipedia, shows the blow by blow.  (For history buffs, there’s an interesting chronology available here.) 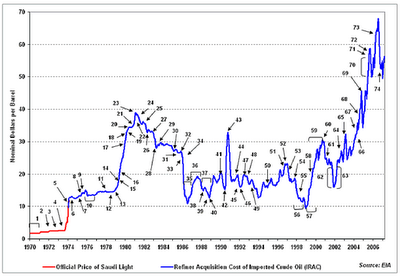 What?  You don’t remember The Great Crab?  Okay, so it’s possible I just made that name up.  But, it’s kinda catchy.  And, more importantly, it fits. 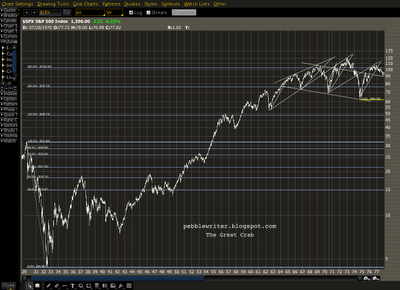 First, well… it’s a Crab pattern.   It features a point B at about 50% of the XA price difference (for those who skipped the lesson, go back and read: Crab and Butterfly Patterns Explained.)   Second, it began in the Great Depression, so that gives the name a ring of authenticity.

And, finally, what else would you name a pattern that in 1937, after a 90% drop, 300% rally and subsequent 60% drop, pretty accurately predicted the following reversals at key Fibonacci points?

All that coolness aside, I believe the 1970s offer important clues to what lies ahead.  I’m doing some research that I’ll publish in the next day or two that, quite frankly, is knocking my socks off.