For newbies, these events are significant, as they are the first step in building a Gartley pattern.  Gartley’s are simply a series of reversals that look something like this:

The concept is that the market undergoes a series of failed breakout attempts that, upon the last turn, leads to a reversal.  In a bearish Gartley, for instance, the market falls from X to A, then reverses —  retracing (recovering) 61.8% of the drop to B.  The fact that it doesn’t go any further is the first failure.

It reverses and falls to C, which is typically 38.2 – 88.6% of the distance from A to B.  The fact that it doesn’t go any lower is the second failure and sets up the third reversal.  From C, the market heads up again to a level that, in a Gartley pattern, is 78.6% of the distance between X and A.

It sounds confusing, but it’s not.  The percentages are based on Fibonacci numbers — a very cool way of looking at the universe that dates back to ancient India (200 B.C.) but was “popularized” by Leonardo of Pisa (also known as Fibonacci) in 1202.  Fibonacci numbers and the Golden (Phi) Ratio are endlessly fascinating, explaining such divergent designs as sunflowers, insect wings and the layout of Egyptian pyramids.

Fibonacci numbers are instrumental to the construction of Harmonic Patterns, one of which is the Gartley.  Other well-known patterns include the Bat, the Butterfly and the Crab — each of which has its own set of targets for reversals.

So, why the history lesson?  Check out this chart: 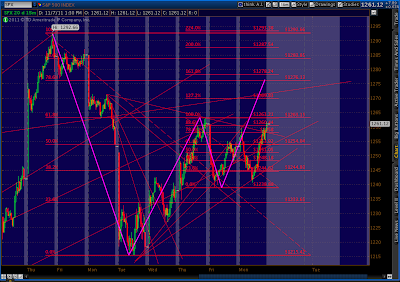 As mentioned above, we reached Point B at the .618 level last Thursday.  With today’s drop to and reversal at 1240, we established Point C.  All that’s left is Point D at 1276.13.  A reversal there could signal the end of wave (ii) and the commencement of the long-awaited, very aggressive (iii) of 3 down.

Both Butterflies and Crabs allow a .786 Point B.  So, the likely target is either 1269 or 1278.  In this case, with the likely target of the larger Gartley pattern being 1276, I’m inclined to expect a 1.618 extension on the smaller pattern (I’m more confident when different patterns indicate the same target.)

BTW, as Dillzs99 points out, Gartley’s sometimes “fail” to reverse at the .786 and become Crabs, extending out to the 1.618 level.  If this were to happen, the target for the larger pattern would be around 1340.  This, of course, would mean 1292 was not “the” high for this pattern. 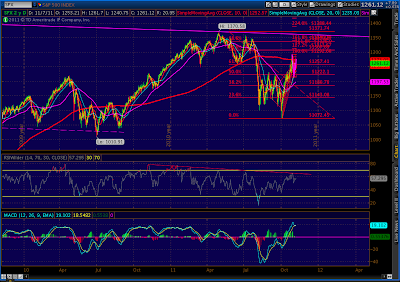 I also like the pattern that set up on the McClellan Oscillator.  It closely resembles the well-developed, concave shape of the last two 100+ point plunges — deviating nicely from its trend line and putting in no fewer than 6 peaks above the 200 line.   In fact, the backtest the MCO just made argues for no higher prices at all, but it’s not so precise that I would use to override the Harmonic forecast. 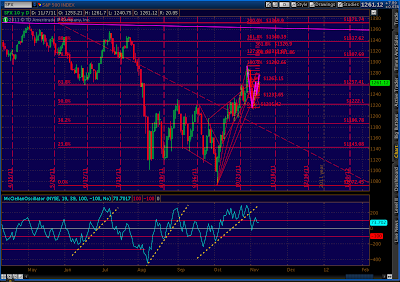 It’s worth noting, however, that nearly every trip to the 295+ level has brought at least a 100-pt drop in the SPX.

Last, I’m keeping an eye on the regression channel off the 2011 top.  I’ve drawn it to be parallel to the 2007/8 top’s, and thus far it’s done a pretty good job of forecasting.  It’s shown here as the three yellow lines (with the dashed midline.)  Tomorrow, it’s around 1274, in the right neighborhood if my harmonic assumptions are right.  This is admittedly an eye-balling kind of exercise, and is extremely sensitive to user (my) error. 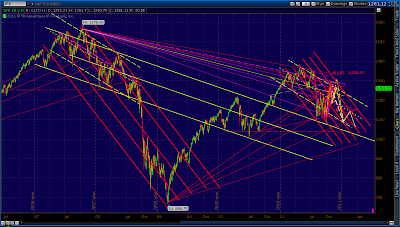 First, let’s see if we can take advantage of the 40+ point swing that should come our way over the next couple of days.   Then, we’ll see if this wave 2 is done, or extends out to early December as I pondered the other day. 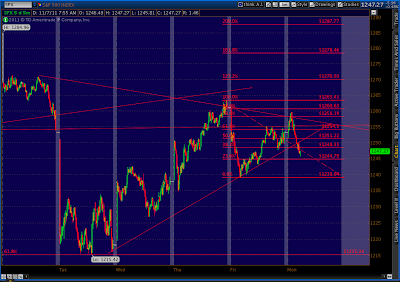 SPX completed a little Gartley pattern this morning, reaching the .786 Fib at 1258.01.  Obvious divergence on the 5 min charts.  Look for a nice reversal to at least 1246. 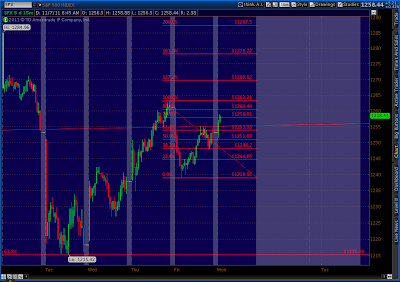